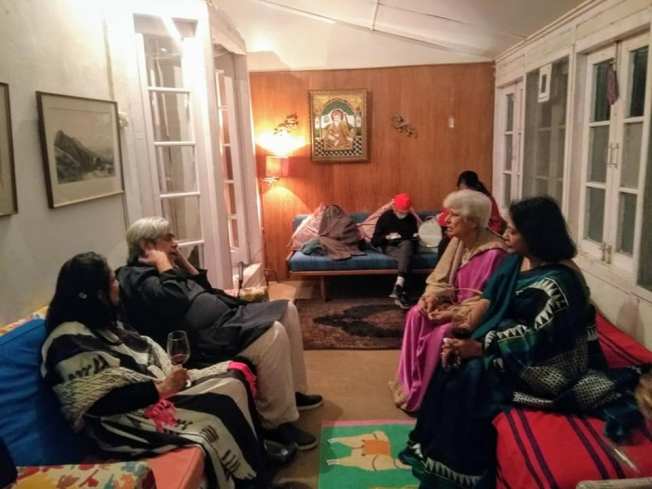 Saeed Mirza set the ball rolling with a cryptic “my mother came from Quetta.”

“Mine too,”said Reena,“she came away post partition, carrying memories she continued to relive. Constantly yearning for her lost watan.”

Watan, I mused. Same as mulk. Both meaning country.

Saeed explained the subtle difference. Mulk had a limited connotation. It could translate as nation. A physical entity circumscribed by borders.Watan was much more. It had a deep emotional quotient. It was where the heart belonged. He elaborated by reciting a verse:

Both Reena & Saeed went on to talk about their Quetta connection. Down to the weather & the purgatorial heat of summers. Reena had grown up listening to her mother’s narrative. Nostalgic tales, that had resulted in a dedication & an offering. Her book: ‘From Quetta to Delhi. A Partition Story.’

Saeed too had a stock of raw, powerful memories. And he had also just released a book, ‘Memory in the time of Amnesia,’ its scale wider than the tale of partition, it encompassed the entire world.

Coming from an Aligarh based family of scholars, Saeeds’ father had gone to Quetta to meet a sister & to find himself a bride. A man of letters, he was flabbergasted at the primitive ways & tribal mores of the clan. His most immediate worry being who would marry him, a scholar?  Did they even understand one? Without land or property how would he support a family, they asked? His brother in law had come to the rescue, describing him as a teacher. ‘Ah, Talib,’ they exclaimed. Talib! He was thus able to find himself a wife.

Asked why she had given her consent, his mother said that she was fascinated at the prospect of getting to see the world.

“I loved the way your father talked about the outside world,” she said.

That sounded so much like my story. A military officer from Kathiawar my father had proposed to an aunt, Mum’s eldest sister who turned him down saying she did not want a nomadic existence.“Moving from place to place.”

My mother desired precisely that. “Moving from place to place. I want to see the world,” she declared. (vis-a-vis the WWII tagline ‘Marry an army man & see the world’) They were married & moved to Quetta.

Completing the quartet Deepa came up with a nugget of a tale. Her grandfather, a doctor in the Royal Medical Corps was stationed at Quetta in the years preceding the great earthquake. His young wife by his side. An educated Tamil girl she would take time understanding the peculiarities of a wild & strange land. There were cultural differences galore. She did not cover her head, for one. It was not her custom. The local women however began to view her as ‘ besharam,‘ which amused her no end. Had she not seen them squatting on the floor, rolling chapatis, heads fully covered while bosoms heaved bobbing up & down?

Sharam, they countered was here. Only here – pointing to the head.

Do you not see a Karmic connect in four persons of diverse backgrounds coming together for a tete a tete? On Quetta. In Kasauli – of all places.

I do believe that we connect through our stories. And shared stories connect us over time.