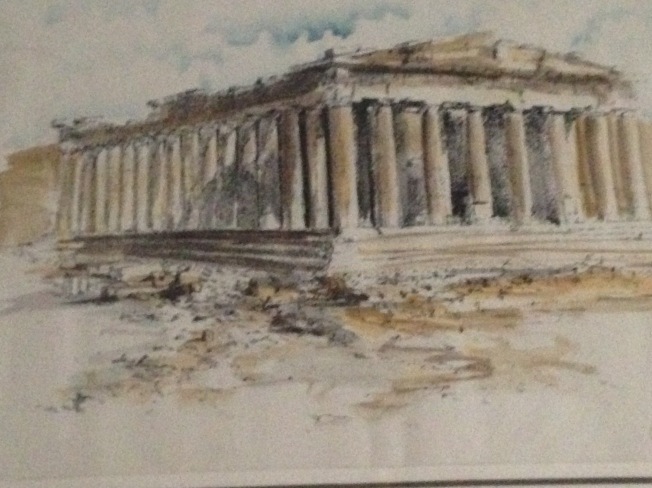 Honors for ruthless efficiency must go to El Al. Despite before – hand warnings we were shell shocked. Gawd, what a grilling!

A Moshe Dayan look alike, on that Delhi – Tel Aviv flight added to the mystique. He was curious about everything including my reason for not flying my national carrier & went on to explain his country’s focus on ‘terror’ & ‘security’. This was pre 9/11. Early days, yet Israel was all on edge. We touched down at Ben Gurion to loud claps & cheers. Unfamiliar & a bit unnerving but quite the norm apparently. Glad to be home safe, I guess.

Two hostesses met us with placards & food coupons, escorting us to the transit lounge, to rest until the onward flight to Cairo that evening.

Was there a problem? With multi entry visas, we had no intention hanging around the airport. There was a full day in hand with plans for Jaffa.

Exiting the terminal taking a precise number of steps (as instructed by “Lets Go”, our bible on the move) before us lay ‘this’ ‘that’ & the other. Everything as described – exactly. To our right, was a bus stop, from where we could take Egged bus no: 495/ 3.90 Shekels/ 40 minutes to Jaffa. The landmarks along the way came as mentioned, the lighthouse our ‘get off ’ point.

Wandering around Andromeda fort, St Peter’s monastery & Museum of Antiquities we were back at the airport in time for the flight to Egypt.

Yafo, as the Israelis called it, was a gem. What a beautiful sight, watching young artists sitting & sketching on the stone steps leading down to the waters. Digging into fresh tuna sandwich and the sea, a perfect blue.

Flying El Al was a mistake. It was a pain, entering Israel or exiting. If latter the question sternly asked was whether one had visited Palestinian areas. If yes, the next question was why?

Israel’s a remarkable country notwithstanding. I shall forever carry memories of Yad Vashim, the youthful zest & energy of Tel Aviv, Ein Geidi the perfect relax by the Dead Sea & soul stirring Masada.

Not to forget Jerusalem. It touches like none other. The pinkish hue of your stones Jerusalem – early morning, late evening & into the night. 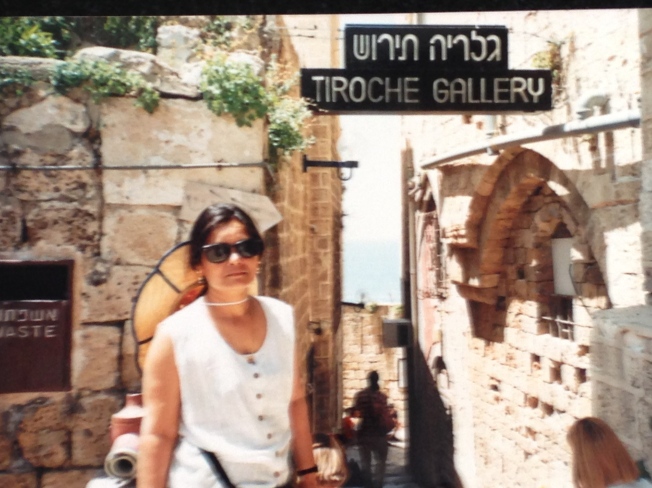 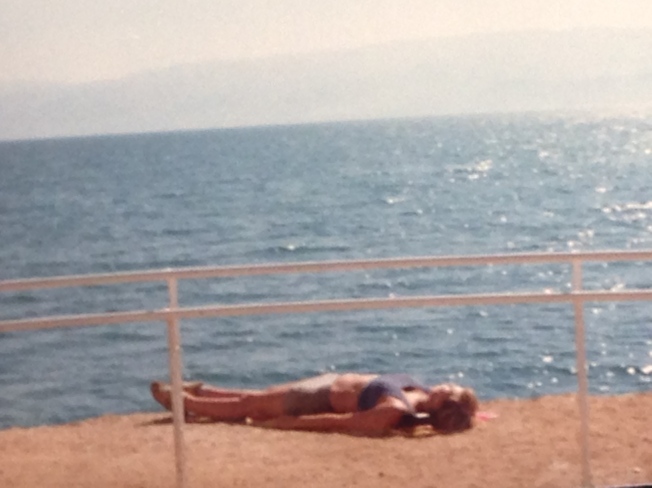 There was no such fuss at Cairo International. Touch down at midnight & Zafar, to meet & escort us to our hotel – ‘The President’

Egypt was tremendous. The size & scale of monuments truly mind boggling. But there was something strangely out of sync too. A kind of historical disconnect. As if the present didn’t quite flow from the past. This, said with the benefit of hindsight no doubt but the feeling was constantly there.

A pity we didn’t make it to Alexandria but lucky we did to Cairo, Aswan & Luxor.

Cairo to Aswan by train is an overnight, 15 hour journey. The smiling attendant on board could not figure out temperature control; hence we were left freezing or stewing to death, depending upon whether the AC was switched on or off. The matter was resolved by keeping it permanently on. Sleeping bags were rolled out (shivering Sahara) and we went silently to sleep.

There is something fascinating about rivers. A kind of magic that uplifts & delights, be it the Mekong, Ganges or the Nile. We did the mandatory Nile cruise of course, though it was disappointing to see a placid & tame river. The Nubians along the banks invited us to their home – invitation declined as intentions suspect.

And the children with the donkeys, ambling along playfully, calling out to toss them a coin.

On ‘Captains Night’, I slipped into a Gallabiya, to surface as queen of ancient Egypt. My prize? A queen. No less. A hand crafted, long necked, elegant Nefertiti.

Sailing into Luxor billboards exhorted us to smile.

“ Smile – you are now in Luxor”. Big, broad, tree lined streets. Houses with ivory white exteriors & colonnaded verandahs. A wind – surf swept promenade along the bend of the river. It was a typical colonial town.

And Amal, our gorgeous guide – if I may.

On the way to the airport, there was a sudden, fierce & sinister darkening of the sky with winds at over 60 miles blowing sand into the face & eyes. Uprooting everything along its path. We are lucky we discover, for this is the infamous khamaseen – desert storm,  not to be missed phenomenon.

My one lingering memory remains the taste of fresh Hibiscus juice that was served by the gallon, day & night. 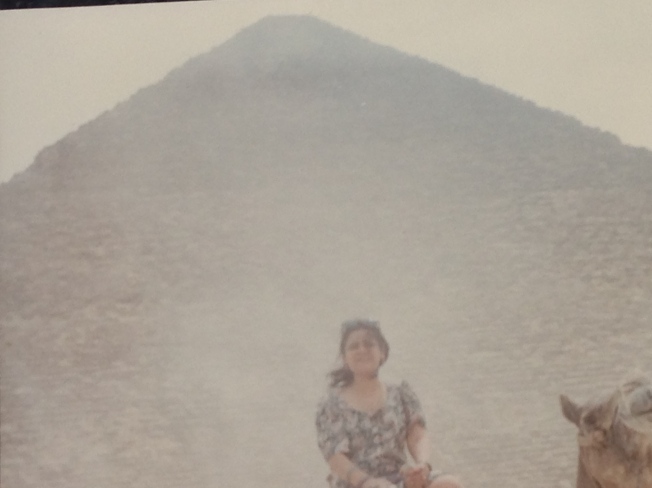 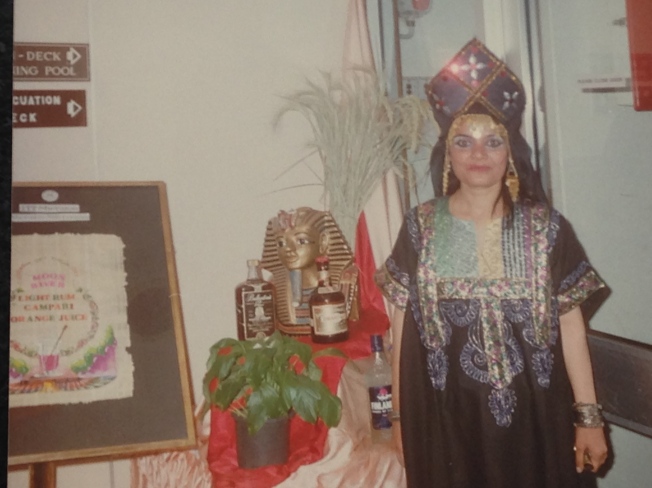 Cyprus happened for one reason alone. AKG. The entire 5 country trip in fact was courtesy him. Rather late in the day for an acknowledgement but a ‘thank you’ is in order, so thank you, Ashok Kumar Ganapaty. Out on a lark for a month & a half, without credit card or insurance, one wonders today at the audacity. What if ? ….. Such ignorance! It turned out was bliss.

Arriving at Larnaca past midnight, my friend Denise breezes past immigration while I am asked to step out of line & wait. The fault is in my stars. The snag, in the passport, where I am ‘male’. How come nobody had noticed? Not even all knowing – all seeing El Al? The joke on them, finally. It was nice to get even.

The moon is up as we hit the 4 lane from Larnaca to Nicosia, Ashok’s brand new BMW adding to the exhilaration. We have three nights in Cyprus with Ashok & Mo who show us around the little isle, everything from Kykkos monastery up in the Troodos to beach resorts at Limassol & Agia Napa.

Cyprus is pristine, pure, and idyllic. A country with zero pollution (UN statistics). State of the art roadways with miniature orange trees planted as road dividers. Does nobody ever pluck the fruit? Or is it mere ornamental?

What surprised one most were the number of Philipinos working as maids, in every second household almost.

Also, the large number of hunchbacks. What could possibly be the reason? 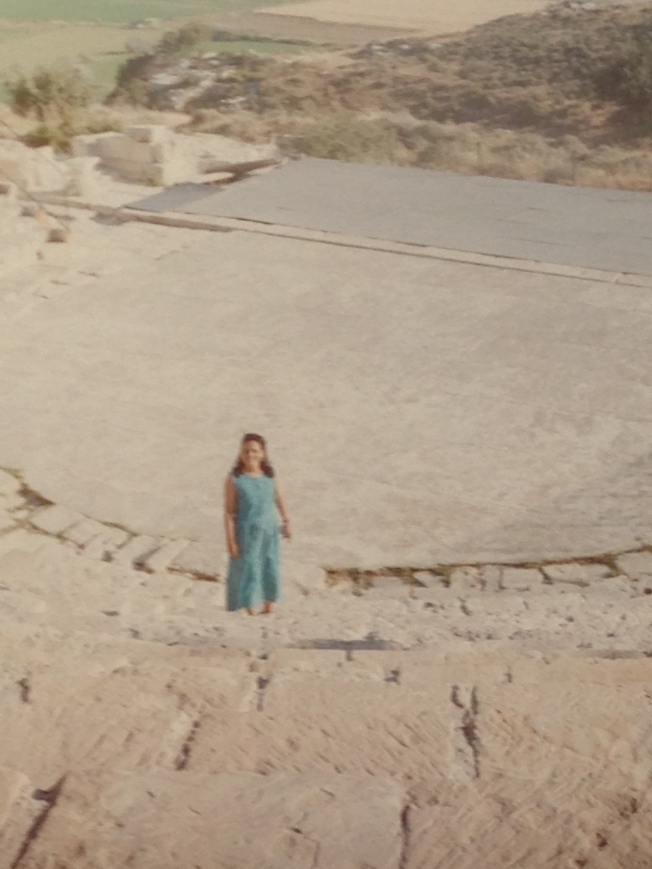 As the aircraft began its  descent the outline of the Greek archipelago hovered into view. It was like an atlas laid out before the eyes. The waters of the Aegean & the Mediterranean mingling into a dramatic expanse of blue. Athens – 1997 was an exciting place & time to be.

An airport taxi brought us to 75 Damareus Street. The number 75 emblazoned boldly on the door & Yannis there to open it. He did so with a little Anthony Quinn style flourish.

To find our bearings –  first a recce by tram & bus before exploring the city on foot. In the next 10 days we were to cover every inch of ground almost, much as a local would have done.

Greece is  gorgeously hedonistic. A place where one feels no embarrassment. Where Epicurus thrives & survives. It was once a Phallocentric society & though it has long moved on to several denominations of Christianity, one does not feel the kind of disconnect that one does in Egypt.The Greeks know how to live it up. Athens is alive & bustling with musicians, dancers, street performers, theatre & festival. What to say about finding a real life Organ Grinder on the streets – never expected to see one, ever.

The 70 kms drive to Cape Sounion runs entirely along the coastline. Low hills descend to pine groves on the beach. It is spectacular.

Sixteen Doric columns of the Temple of Poseidon {6BC) is all that remains on the promontory. Sitting on the rock jutting out into the sea there is the Aegean deep down below, blue skies & howling winds above. Did Shelley actually drown here? Or is it, as some believe the site of lost Atlantis? Clearly visible in the far distance is the Bay of Corinth. Breath taking!

Timeless beauty marred as usual by the mundane. The last few days saw strikes & demonstrations. Demonstrations outside parliament & random strikes as buses went off roads & garbage piled high. Greece was in turmoil. It was a mess.

After that many days of being on the road, a day was set aside for general admin. Yannis allowed us the use of his antiquated washing machine in which a coin had to be dropped for it to take off with a roar. There was no washing powder but we managed a bar of soap that was grated & used. This, from Maria’s shop. ‘Namaste Maria’, as we called her. Having lived some months in Delhi she knew a smattering of Hindi & always loved to greet us with a ‘namaste’

At 75 Damareus meanwhile, Yannis continued to regale. On May 15, Denise’s birthday, he danced a ‘Zorba the Greek’, offering to teach us the steps. But we were off, to a celebratory dinner at ‘La Bonita’ where Poulos would serve the choicest wine & cuts.

And what of Yannis? One didn’t quite know what to make of him. Much like the graffiti on the walls. The zaniest ever:

“create your own space”

“ forget the housework, come to Greece”

“the same shit – another day” 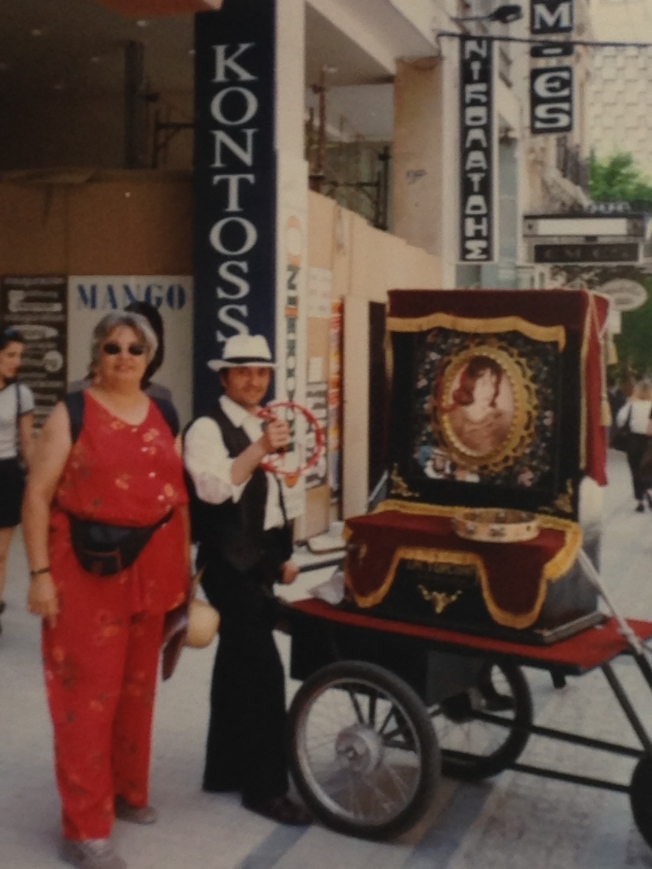 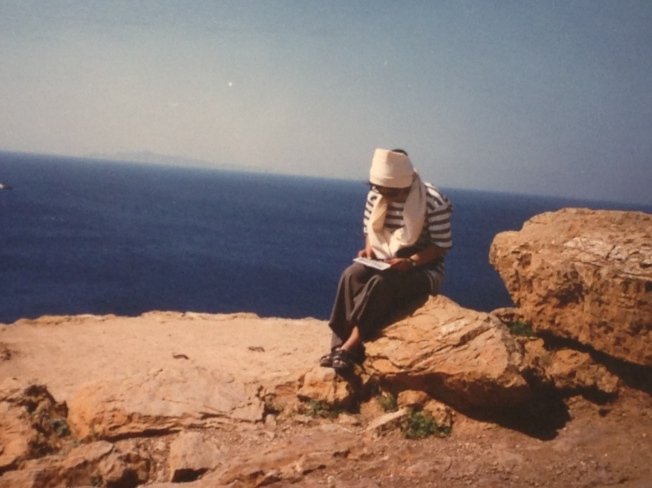