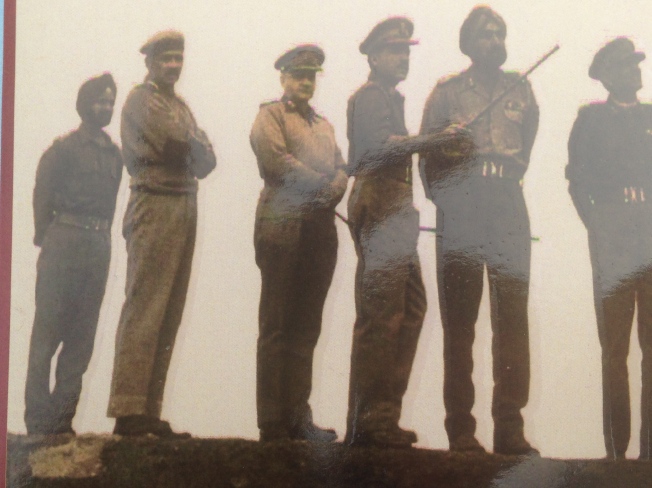 We proudly celebrated 50 years of the 1965 war this year. It is therefore befitting to recall the valour & sacrifice of those who made the victory possible.

Some reminiscences then, of the capture of Hajipir – Pt 13620, straight – as it were – from the horses’ mouth.

Code named Operation Bakshi, 68 Infantry Brigade was tasked with the execution. The orders went out on Aug 15,1965 & Hajipir was in Indian hands by August 28.

There were casualties, feats of endurance & bravery but the hero undoubtedly was Gen RS Dyal MVC, PVSM.

I have had the honour & the pleasure of meeting the General & distinctly recall a misty November morning, 4 years ago when veterans got together at Nahan for yet another Hajipir Day celebration.

A small close knit group had collected around their former Commanding Officer & one of them was heard saying “chalo Saab, assi phir Hajipir chalein”

This has been the general lament. A constant refrain heard over & over again, of veterans wanting to know why Hajipir was returned.

But that is another story.

On August 28 this year, there was chai & pakoras, joy & bonhomie as Mrs Dayal inaugurated the auditorium named after her late husband. Former comrades in arm reunited. Some limping, some hard of hearing, they back slapped, joked & talked, graphically recalling tales of glory & of their ‘famous’ victory.

etc etc etc the roll of honour rolls on.

All, young 19-20- 21 year olds then & mostly without a clue except, for their inspiring Company Commander Maj RS Dyal who urged his men on, displaying outstanding leadership for which he was awarded the MVC.

While Col Bindra gave a presentation with complete military details the others talked of lighter moments like playing volleyball with the enemy prior to hostilities or of engaging him in fierce hand to hand combat when it came to the crunch. They had shared ONE toothbrush & had eaten half cooked meat sans salt or spice – the taste, still lingering in the mouth. The same old war stories ad nauseam but quite different when hearing it from them.

Minor details: On the final assault the soldiers walked 4000’ on foot.

Their field rations were soggy ‘shakarparas’ & biscuits. Soggy, because there had been unexpected showers the night before.

Hajipir was captured at 1100 hrs on August 28,1965. The enemy thereafter, made repeated attempts to recapture the pass, but was successfully thwarted. In recognition of its indomitable spirit & gallantry 1Para earned one MVC, one VRC, 2 SM & 4 Mention in Despatches, along with Battle Honour Hajipir & Theatre Honour Jammu & Kashmir.

The Tricolour atop Hajipir

One may well ask, what manner of men are these? The following story narrated by Maj Gen VB Batra may just provide an inkling.

It was a 45 day affair intended to test new methodologies in mechanized warfare.

I, was a Capt, a Battery Commander then & was affiliated to him. Watching him operate at close quarters, was for me a learning experience. There were lessons pertaining not only to military training but life as well. He’d explain Infantry tactics over a drink……. I still have a book he presented -The battle of Dien Bien Phu’ “

Gen Batra also mentioned a 3 day training capsule they were part of.

In a loud booming voice he had heard CO 1 Para exhort his men to go hungry, to stay without sleep & to march, move & dig from position to position.

Most importantly he led by example. Baton in hand, Lt Col Dyal would make the rounds, checking each detail every night. If anyone were caught napping he’d poke & shove the fellow in the rib, startling him out of sleep.

The Capt asked, “ Sir, how do these chaps let you do this to them? what if someone were to snatch the baton or stall you. Would it not be an embarrassment? “

“ mein kabhi kisi ka pate nahin kaat taa” replied the man. Meaning that he neither meant, nor ever did anybody any ‘real’ harm. That was his philosophy. Earthy & elementary. Like the man himself. He was a simple, self contained person, much loved & respected by the soldiers he commanded.

Add to that the formidable reputation he had acquired post 1965.

His only indulgence it turns out, was the pleasure of good quality Scotch. He liked his drink & the story goes that Chokharam, the barman had remembered to carry it right up to Hajipir that day.