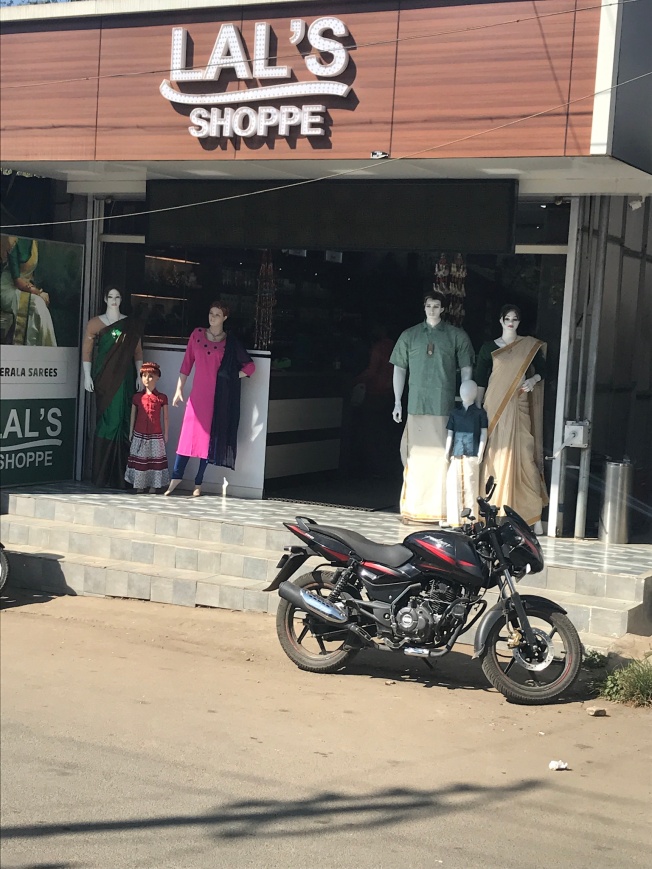 Traveling cross country reinforces a definite impression that the South at least has got its act together. Kerala in particular. Kochy – Munnar – Thekkady –Thiruvanthapuram – Alappuzha – mile upon mile of forest, plantation – sparse population (relatively). The education hurdle was crossed way back in the sixties closing at 100% literacy. Mass emigration followed leading to the Gulf rush & new found prosperity, visible everywhere. Notice the flamboyant houses – size, hue & colour. Infrastructure & super highways that offer zero chance of knocking down stray cattle in this, our very own beef country.

From smog filled Delhi to clear blue Munnar skies & a state wide ‘bandh’ against the entry of women into Sabrimala. It is a fairly peaceful affair with complete business shut down, people – traffic off the roads & driving a pleasure. Going past tea gardens, spice – rubber plantations, forests, dams, waterfalls, river Periyar & the quiet serenity of the backwaters. 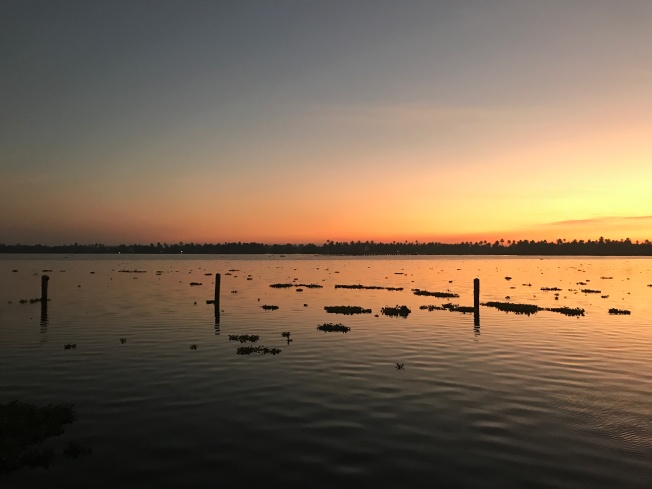 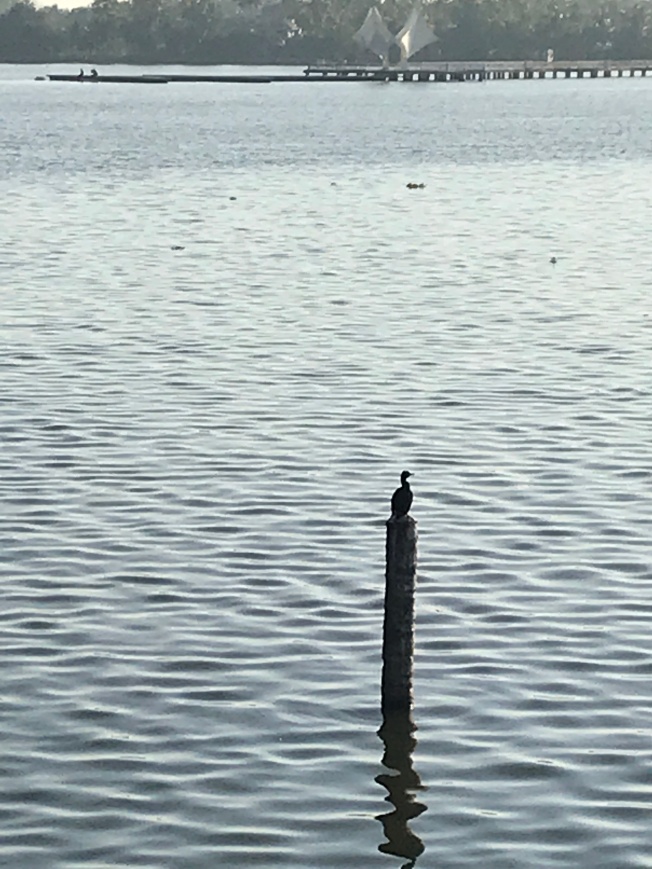 Renji our driver & guide, barely communicates but he is pleasant, well informed & an ex army man to boot.

The State has a large reserve of ex servicemen & they are of two kinds. The Bacchus brigade that believes it has earned the right to endlessly imbibe & the ‘Diehards.’ Veterans putting skills to use, earning a tidy packet. Selvi, the owner of the houseboat we hired was that. Through dint of hard work he had acquired a fleet of 6 houseboats. Considering that each cost over Rs 90 lakhs, this was no mean achievement. He sat us down to banana chips, drinks & a wistful chat making sure his boat departed on time & everything was in order. The Captain was directed to cruise to a certain spot for us to select from the catch of the day. Our sea food dinner, prepared on board. A splendid meal on all counts after which we retired to the comfort of air conditioned rooms, experiencing the backwaters ‘neath star spangled skies. Our boat anchored near paddy fields we were in the company of fire flies, crickets & tadpoles. It was a night to remember. As was the golden dawn. 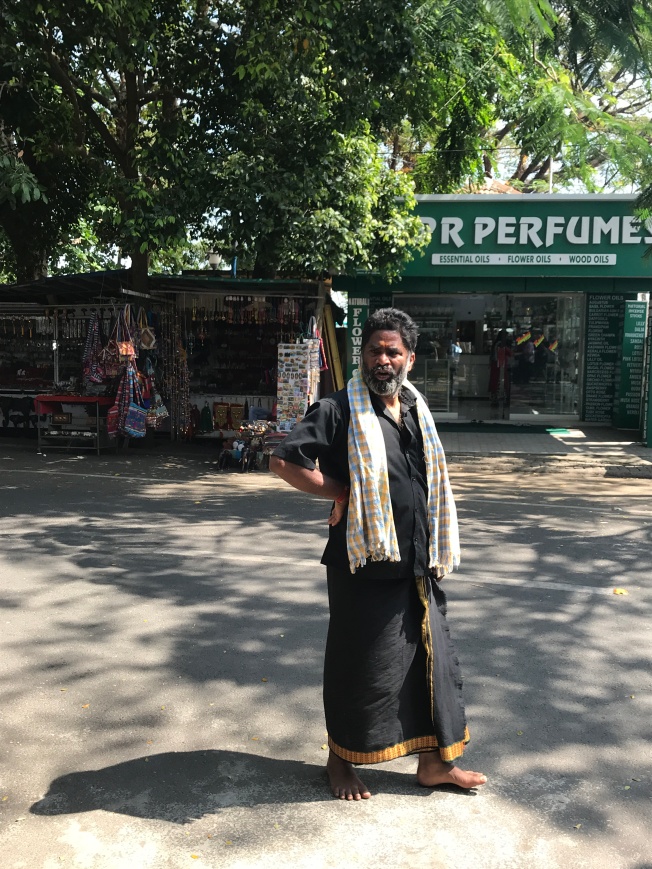 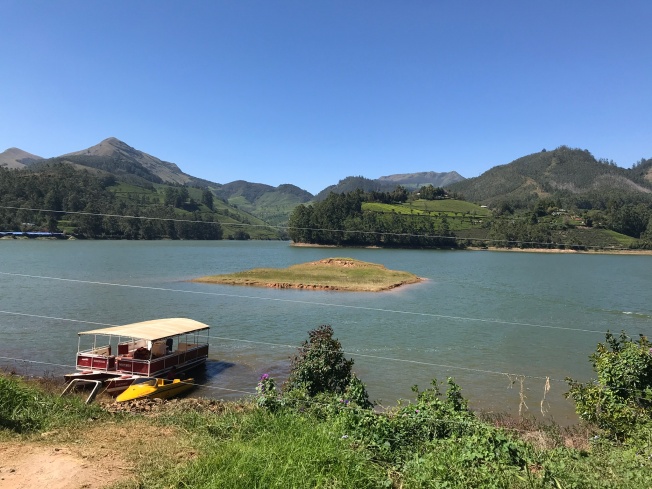 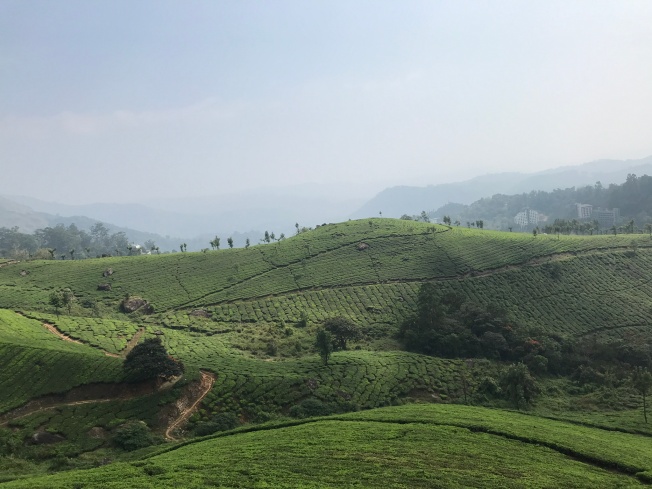 The days went swiftly by soaking oil massages, cuisine to die for & the arts – Bharatnatyam, Kalari etc – so intrinsic to this land.

Hence, off to the legendary spice markets……

Fort Cochin area has elegance & charm. Also, the aroma of whole & freshly ground spices. Our hike through spice country had been an experience but this was something else. An array of spices greeted the eye. Cinnamon, cardamom, bay leaves, cumin seeds, star anise, vanilla, cloves, ginger, nutmeg & peppers. Peppers, round & elongated. Peppers red, white, black or green. Had no idea such a vast variety existed or that there were 2 kinds of cinnamon. The soft – light variety used in sweets & the thick, hard, dark kind that spiced up curries. Deliciously exhilarating, I could easily have swooned.

The shop keeper, a pro fished out jars full of spice for us to touch, feel & examine. Dive our nose into & inhale. The perfect seller – buyer quid pro quos.

Ahhh! Ahhh!! No word to describe it.

Sudden comprehension dawned in the realisation that this was what had brought the world to our shores & us to our knees. The English, Dutch, French & Portuguese, who  arrived from around the Cape of Good Hope. They conquered, made quick fortunes & disappeared – into the dust bins of history. With new found culinary skills & a rudimentary knowledge of spices one would hope. Or were they merely after that pot of gold? 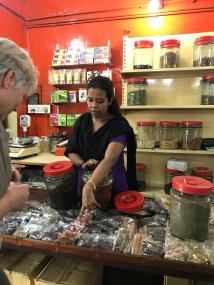 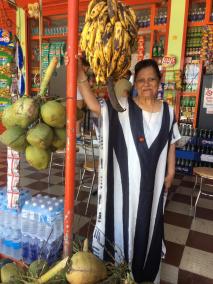 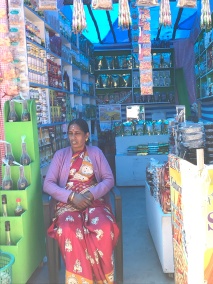 Oils
On this my 4th visit I had once again missed the spectacle of the flowering Neelakurinji. A once-in-12 year occurence, when a carpet of violet- pinky blue covers entire hillsides for the shortest duration – 2 months to be exact. The next flowering would be in 2030 & I may not even be around. In response as if, a tiny little floweret caught the eye. The last of the season. Bidding a lingering farewell. 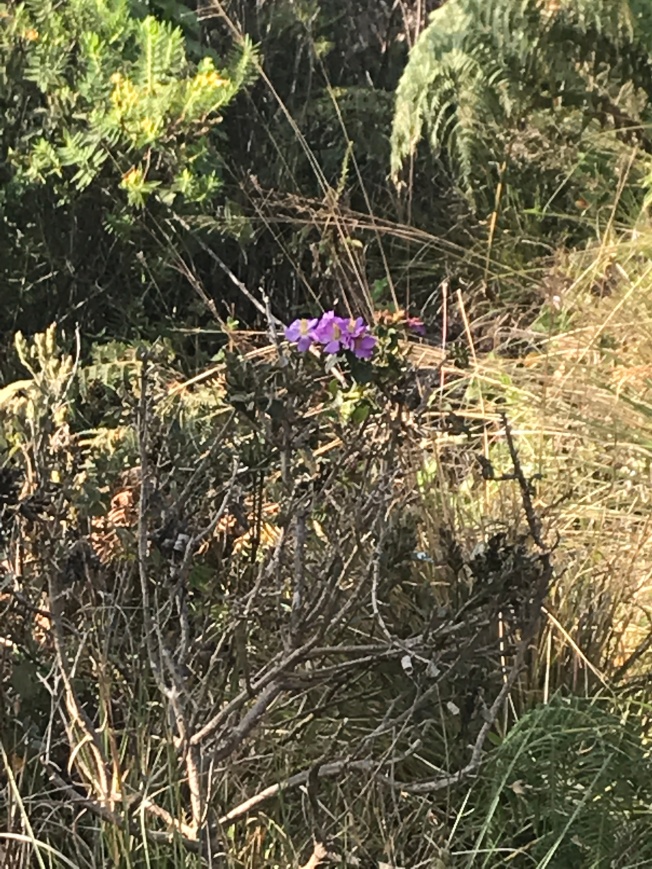 Change happens everywhere, every time. Sometimes for the better, needless & distressing otherwise. An ordinary break in continuity, like a change of place names can disorient & bring on a wave of nostalgia. Alas, for the cadence of soft sounding names: Cochin, Trivandrum, Calicut, Alleppy, Quilon. Forever gone. Like the topless old women & little girls in long skirts – half saris. Mundu clad men too, a breed of the past.

If only there was a way of turning back the clock. 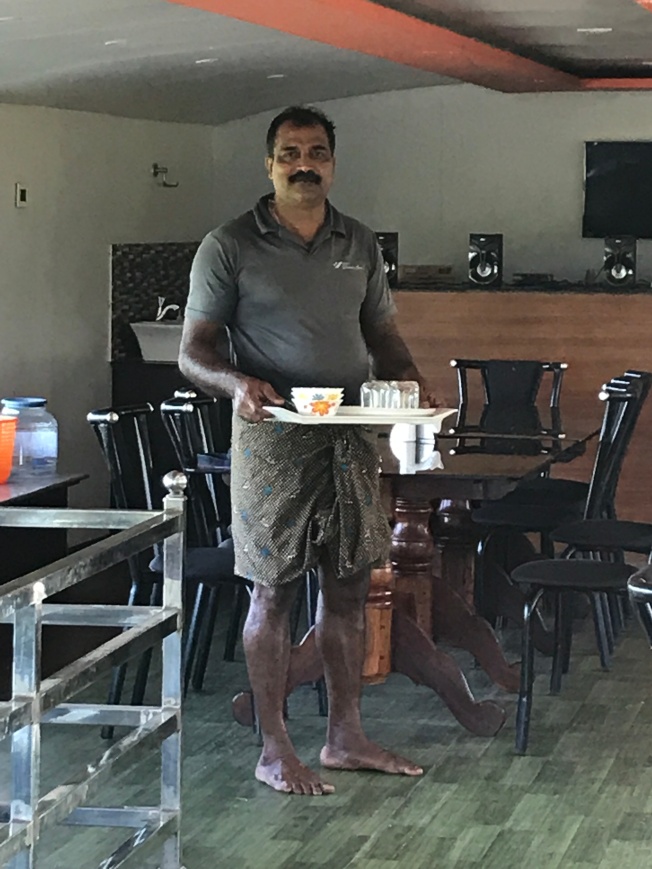 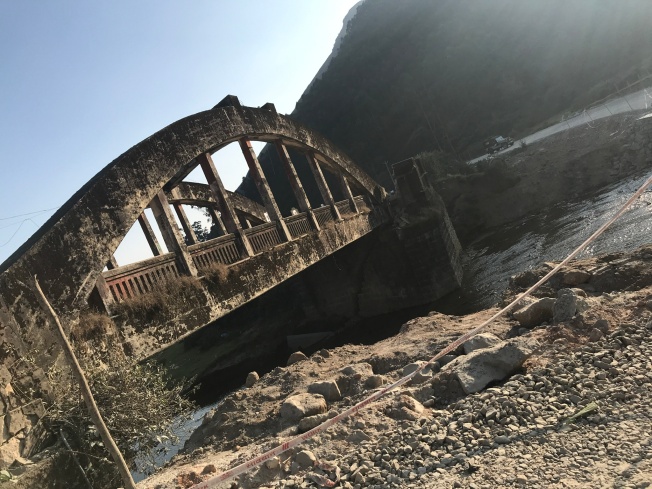 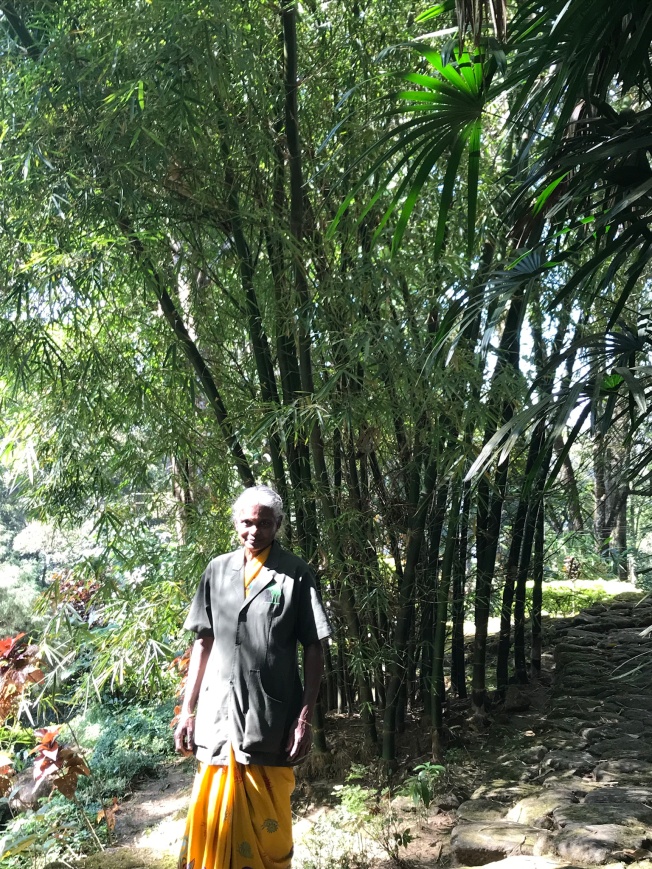